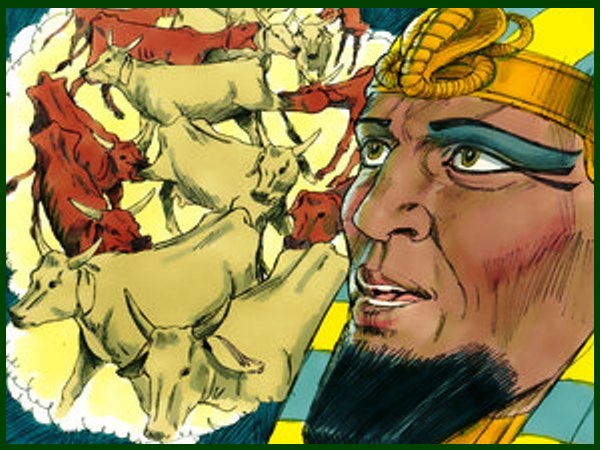 In the Bible, we read an interesting story of Spiritualism, Economics and Trade.
God speaks to Egyptian President by giving him a strange dream of lean cows eating fat cows. Alarmed the Egyptian President summoned his Intelligence agencies, his Cabinet and Special Assistants on Religious Affairs, all his top Advisers, no one could decipher the message in the dream. Then an Adviser previously in EFCC custody remembered a former inmate who was very good in analysis of data, He tells his President who summons Joseph immediately. Joseph shaves, wears a nice suit and goes before the President. Joseph hears the data from the President, and responds
A. There will be an oil boom that will increase the wealth of the Egyptian Government. The Government will make a lot of money for 7 years.
B. Then after 7 years, the oil boom will end and the world will enter a recession.
Please note, what Joseph said next,at this point he was giving his own advise to the President.
Joseph tells the Egyptian President; “set up a Sovereign Wealth Fund, save 25% of the oil wealth for those 7 oil boom years. Then look for a man, discrete and wise to act as Chief Economic Adviser of the Federation to implement the plan”.
What Joseph did here was to identify the problem, give a solution, and then offer himself a path to becoming  a man “discrete and wise” to implement the solution he advised. Pharaoh agreed, made Joseph the Chief Economic Adviser of the Federation. As recession swept across the world, Egypt became the center of the world, all the nations came to Egypt to trade, Egypt became richer, Joseph became a Super Minister.
The End.
What is the moral of this story?
1. As a President: Your only as good as the advise and advisers your surround yourself with.
2. As a Pastors, its not enough to give prophesies, if God revels something to you, He will also give you an interpretation with clear dates and a solution, just as he gave Joseph. Prophecy without direction is useless.
3. As an Entrepreneur, referrals will make or break your business. Joseph was referred to the President by a fellow he “traded” with when he just a startup, treat your early customers like kings.
4. As a Person Educate yourself. Joseph gave the “Spiritual”, but then followed up with the “Economic”. keep learning
5. As an Economy; every economic boom is followed by a recession, every recession creates opportunities for people that prepared during the recession.
in the Universe; there is no luck in getting wealth, its always planned. no one is lucky
(Picture Credit: Walking with Yeshua)