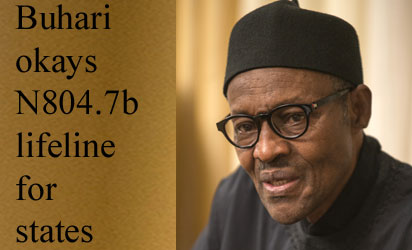 It’s been coming, it was finally announced yesterday 6th July 2015…States of the Federal Republic of Nigeria will receive a bailout to reflate their balance sheets to meet short term liabilities…In English the FGN/CBN is taking cash, giving it to states to pay workers’ salaries.

Is it bad? Well it rewards state governors who simply took workers’ salaries and spent on elections, helicopters and Special Advisers.

This is a legal CRF/FAAC sharing. So its ok….however the President had referred to NLNG as a “revenue generating agency” it’s not, NLNG is it’s not an agency of the FGN. In fact the NLNG payments should go to the FIRS, not the federation account directly but I digress….

So in essence this is a loan by the CBN to the states, however allow me remind us what the CBN said about public sector lending (state lending)

”Banks are reminded of the history of non-performing public sector credits, and are, therefore, strongly advised to exercise caution and set a more conservative threshold to avoid the mistakes of the past.”

CBN went further in 2013 by saying banks would be required to make 200% provisioning for loans granted to state governments. In effect, state are such bad debtors to attract a cover of 200%. In fact in 2012, the CBN banned some states from loans taking from banks  The point is simple, lending to states is bad business, and very risky, you may not get your capital back, but the same CBN is to lend to states, violating its own issues circulars and prudential guidelines…..moving on…..

In English, the DMO will issue bonds or securities to replace the commercial loans the states are owing banks. The objective being to spread out the interest payments and reduce interest pressure, the states will now pay new reduced rates far less the banks are currently charging them.

A state like Osun only gets 36% of its Gross receipts from the Consolidated Revenue Fund, the balance 64% goes to ISPO and other deductions… this proposal will relieve the pressure. So this is good, I like it, even though it means bank will lose income…but hey!

So overall, we have on bad (CBN), one good (DMO) one neutral {NLNG)

However, I don’t like this bailout package as a whole…why?

Are these the jobs were are saving with the bailout?

Ok so we have dimensioned the problem…what’s the solution?

Well I propose we redo the “Buhari Bailout” with some major changes. Instead of a general bailout, restrict the spend to capital expenditure and infrastructure projects.

Let the CBN fund be an equity fund, increased to N1t….let all the 36 Governors bring Capital projects already budgeted and passed, for a period of 3 years from their state assembly. Then let the CBN release capital funds according to the sharing formula in the Consolidated Revenue Fund…note for only capital projects.

However don’t give the states cash, use this N1t cash as equity down payment for PPP projects in the states. Eg a new housing estate is financed by a private developer, but the State counterpart funding comes from this CBN fund directly to him. The developer will build with his own cash, knowing the CBN/State stands as a equity partner/guarantor for the project. Same for a road, a road can be built by a private sector player and the road funded by adverts on the road. The Private contractor knows the states counterpart funding is available as equity to him.

Once the homes or road is built by the developer, the CBN can then exit the investment by selling its equity stake to the state.  The tax payer makes a profit.

This N1t can be matched with a further N1t available to states who have passed Pension Bills in their states and want to build income generating infrastructure projects such as toll roads or ports.

Thus let’s use Osun as an example, under this new Bailout, Osun will get minimum N25b from the CBN to as counterpart equity funding for PPP Capital Projects. This arrangement frees up N25b from the Osun capital budget, that Osun can use however it wants.

The onus rests back with the state governors to fix their wage mess, they can if they want take the “saving” the CBN fund affords them and pay salaries…and the same problem will come in 6 months…or they can bite the bullet and do what everyone is scared of saying, cut the wage bill down to the size of the nee realities of their budgets. There is no law against reducing salaries…the problem is you can’t ask staff to reduce their salaries and still fly a helicopter….

How is this different in the first idea?

We must resist the temptation to spend our way out of problems, this state salaries crisis presented Buhari with a unique opportunity, he could exact significant reforms from the states, he has not….thats the real failure.