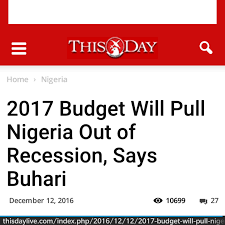 The 2016 budget expired this weekend of May 7th 2017, Nigeria is now without a Federal budget.

A year ago, in May 6th 2016 to be specific, the Minister of Budget and National Planning, Udoma Udoma was speaking about the delay in the passage of the 2016 Federal budget. The Minister explained that to ensure the 2017 Federal budget did not suffer a similar delay, the executive planned to submit the draft 2017 budget bill in October 2016, to enable passage of the 2017 budget before the end of the 2016 fiscal year. The Minster said December 2016 was a target date because of the dry season which was the best time to commence road construction and improve budget implementation.

The Minister was emphatic “Our intention, going forward, is to get us back to where we can get a full January to December budget implementation cycle.”

The President is required by law to forward the budget proposal for the given year to the National Assembly  for approval after which the proposal becomes the budget appropriation Act and is then forwarded back to the President for assent. Both the Executive and Legislative are responsible for preparing the Federal budget. The Executive and Legislative in this instance belong to same party, and have passed a Medium Term Expenditure Framework. So why is there is delay? for over 140 days?

Today there is NO 2017 Federal budget…..(the rainy season has commenced) …..This is a failure of many proportions.
What are the implications?
A. Recurrent Expenses ie salaries. Senators and Civil Servants will still be paid. The FGN will simply borrow, Nigeria’s debt and deficit will go up. Remember even with a signed budget the debt and deficit would still go up…(we understand the National Assembly has increased their budget appropriation in the 2017 budget from N120b to N150b, citing inflation)
B, Capital Expenses ie building roads. This delay will have a major major effect. Roads for instance wont be built because there is no cash backing for the capital projects that in many cases involve upfront payments. If cash-backed warrants are approved later in the year, the rains will slow down construction. Even if the FGN seeks to borrow for capital projects, it would be risky for a contractor to commit to a project that may not be in the final budget
The 2017 budget of “Hope and Recovery” has now been in “Limbo and Delay” . If we assume the 2017 budget will be passed in May 2017, it then presumes that for fiscal year 2018, the Federal budget will be passed in May 2019. AFTER the Presidential elections which will take place February 16th 2019. Thus the 2018 Federal budget may be the last budget of the first term of the Buhari Administration. The effect of this delay by the APC government in passing the 2017 annual budget is a possible reduction the budget cycles from four to three, thus the 2018 budget will be the “Mother of all Budgets”…
A budget is not just about figures but also intentions and policy, where there is no budget, then planning by the economic players in any economy is difficult if not impossible. Thus our recommendations for future budgets are simply, the budget calendar has to be baked into law with mandatory dates for the Executive to present a budget, mandatory dates for the National Assembly to receive, review and revert to budget back to Mr President for accent or refusal, these dates have to be hard coded into law.
We should also consider budgets that span more than one fiscal year. We have 3 year Medium Term plan, why cant we have 3 year budgets? We must force our policy and lawmakers to adopt and deploy  a strategic outlook in spending money tied to long term development plans. A multi year budget will also eliminate the repetitions of projects that are uncompleted year to year.
I close with a question, are we still on zero budgeting methodology?
We can do better…